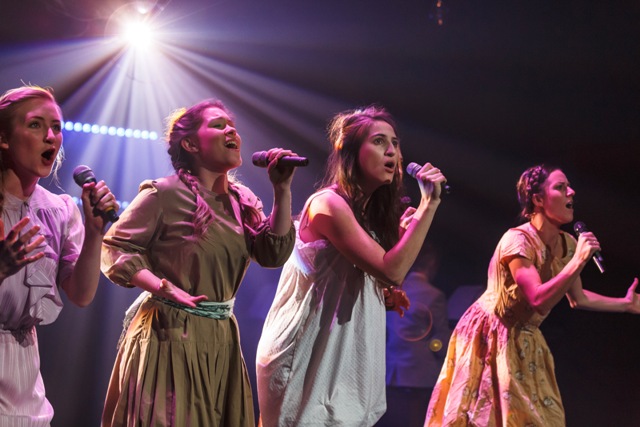 Underground Broadway’s Spring Awakening premiered at the Metro Arts Sue Benner Theatre and wowed the audience with a thrilling and breathtaking production of this coming of age story for Brisbane to find irresistibly heartbreaking and extraordinary.

Based on the original play by Frank Wedekind, the incredible cast of local performers told the story of a group of uninformed and naive teenagers in the late 19th century Germany who are discovering their sexuality and are berated by the adults in their life. The musical is told by the inner thoughts of the youth through an unforgettable rock score by Steven Sater and Duncan Sheik.

The complexity of the cast is unreal, particularly the power of the young actors, it blew my mind. Jacqui Mclaren, portrays the most innocent and uneducated of them all, Wendla Bergmann. Jacqui is the perfect Wendla and embodies her with such a full range of emotion. This is especially true when she asks her friend from childhood, Melchoir Gabor to purposely hit her. In this moment she wants to finally ‘feel something’ in her life as her mother keeps her from all aspects of life and growing up.

Jacqui fleshes out the character and takes us into the mind of Wendla as she begins to feel for Melchoir after they make love (confused and unaware what she was doing). Later Wendla conveys brilliantly how she is betrayed, discovering that she is pregnant and was lied to by her mother about how children were made.

The young actor’s voice is quite remarkable and ignites so much power as her character’s passion is conveyed so vividly to the audience. In particular during the songs, ‘Mama who bore me’ at the top of the show and ‘Whispering’ as she sheds a tear and realises she needs to be a better mother for her future child than her own mother is. You will be seeing Jacqui’s name in lights in no time!

Harrison Aston embodies the brave and headstrong, Melchoir in this production. The well-educated teenager is such a strong force throughout the entire show. Harrison engages in a playful friendship with Moritz and writes an essay about sexuality for his best friend, complete with illustrations to cure his frustrations.

His other key relationship is of course with his childhood friend, Wendla. The connection the two actors have on stage shines through spectacularly. This is further illustrated after they sleep together for the first time. ‘The Guilty Ones’ makes the characters reflect on their time together with this sincere song.

Aston has an astonishing voice especially during ‘Those you’ve known’ as Moritz and Wendla’s spirits rise from their graves to provide him with guidance, as he is close to ending his life when realising Wendla passed away from a botched abortion. The figures form a perfect trio formation as they sing together and entice him to journey on. By the end of the tear-jerker tune he decides to live and hold their memories with him always. Aston has an enormous career ahead of him.

Oliver Lacey takes on the absolutely meaningful and ambitious role of Moritz Stiefel. He is a kind of comic relief at the beginning of the show and then act two he does a 180 degree flip, as he is left on the street by his disappointed and terrible parents. Lacey is a tremendous actor with such a broad range of character within Moritz.

Oliver gives his whole heart and soul to this character. This is particularly relevant when he breaks the news to his father that he failed his final exam and that he won’t further his education. His father’s disappointment, anger and lack of sympathy or love towards his son is despicable, Oliver’s reaction is distressing and upsetting as you feel deeply for him. This is a pivotal moment for him and he has the audience in the palm of his hand. During the beautifully sung ‘And then there were none’ Moritz begs Melchoir’s mother for money as he was exiled from his home. She gracefully denies his demand and in that moment he couldn’t take it and thinks about killing himself. 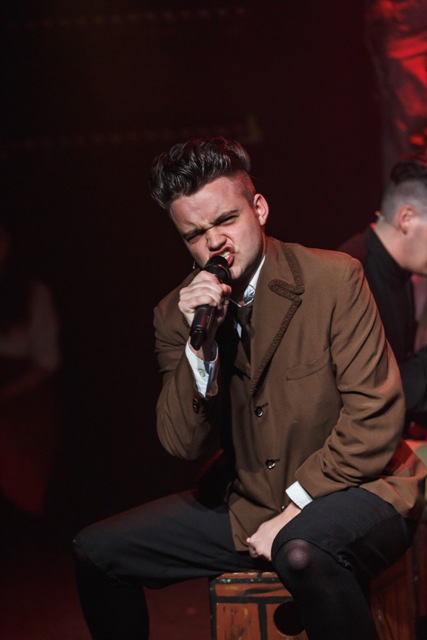 The struggle the young teenager faces with his sex education, overbearing and controlling authority figures and suicide towards the end of the play is handled with such care and takes the audience on a rollercoaster of emotions. The subjects that are brought up especially in Moritz’s arc, are definitely issues young adults struggle with during any time period, which can be relatable to the audience. Oliver performs brilliantly and very much captures the essence of his character through body language and diverse voice. Lacey is a strong actor and is on his way to shoot for the stars.

James Shaw and Elise Greig are outstanding seasoned actors who play a multitude of roles for the adult men and adult women in the show. Shaw first captures the strict and stern teacher at the boy’s school with such passion and conviction. Among a variety of other authoritative figures such as Melchoir’s father, Hanschen’s father, Ilse’s Father, the doctor, the priest, the headmaster, abortionist and most notable his cunning portrayal of Moritz’s father.

Elise Greig is a wonderful actress and also solidifies her versatility as she provides a snapshot of each character she embodies. We first see her confidently and firmly play Wendla’s mother, Frau Bergmann, which she does with a hard heart and good intentions, hesitant to tell her daughter the whole truth about sex and where children come from. She also personifies the rest of the adult women in the show with such enthusiasm for instance Melchoir’s mother, Martha’s mother, Georg’s comical piano teacher and the hilarious accent she spoke with as Fraulein Knuppeldick, the associate of the Headmaster.

A scene that includes Fraulein Knuppeldick and the Headmaster, as Melchoir is expelled by his principal, was by far my favourite scene of the whole show, as they sung the rebellious and fun tune ‘Totally f*ked.’ The entire cast is involved except for Moritz. This song is joyous and everyone stomps around, makes ‘stick it to the man’ kind of faces at the teachers after they blame Melchoir for Moritiz’s death. The staging and the way they utilise the boxes throughout the scene is very inventive and jovial. 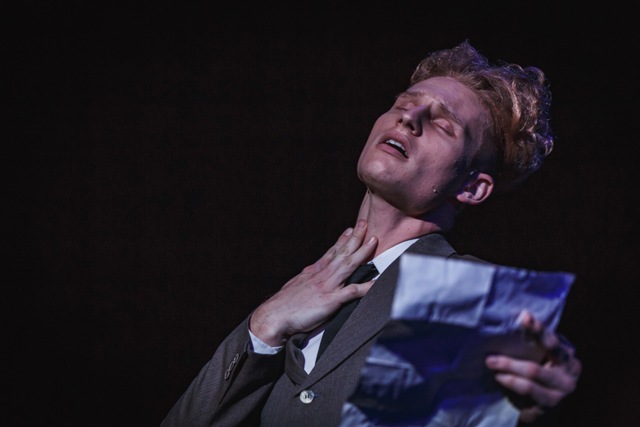 Tim Carroll and Michael Nunn play the incredible Hanschen Rilow and Ernst Robel. They are in Melchoir’s class and are sensational actors and singers. Carroll is hilarious in this role, is comfortable with his own sexuality and has a romantic connection with Nunn’s character, Ernst. Nunn remains so innocent until this moment and you can feel his sincerity towards Carroll’s character, plus his creative hair was a highlight among the boys. The two share an intimate moment and express their love for one another in the beautiful song ‘The word of your body.’

Tom Hooley plays Otto Lammermeier and is trying to find himself, however ends up having ‘dreams’ about his mother and Sammy Sand portrays fellow schoolboy, Georg Zirschnitz who desires his chesty piano teacher. All of the boys come together to sing the teenage angst anthem ‘The bitch of living’ at school as they are taking out their sexual frustrations in a moment in class. The song is filled with so much energy and lifts the audience’s spirits from the beginning with the rock sound.

The choreographer, Deanna Castellana worked superbly hard on this rock anthem to perfect the strong straight-laced movement in this intense song, especially on the chairs. The way she made use of the boxes around the stage was so striking. Another notable number was the beautifully staged ‘Touch me’, as the teenagers move in a circle around the stage. It is choreographed so graceful yet sensual as they express their desire for intimacy in such a moving way.

The young women of the piece are so inspiring as they lift each other up emotionally. Monique Dawes and Maddison McDonald play Anna and Thea respectively. They are best friends from school with Wendla and Martha and are spectacular performers. They were playful and fun in the song ‘My junk’ where they are all confessing who is crushing on whom. Monique and Maddison in particular are insanely talented dancers and shine through as they sing ‘Mama who bore me’ and the reprise. It demonstrates their true passion for the stage.

However Martha on the other hand is an inspiring but helpless character. She is played by the gifted Jordan Malone and makes this role her own. Martha’s storyline is complicated and heartbreaking. The audience learns through the beautifully sung ballad ‘The dark I know well’ that she is being abused by her father and shares that pain with Ilsa, as it is implied she was harmed too. Ilsa is stunningly portrayed by Ruby Clark. She is a childhood friend of the rest of the group but escapes the pain her family brought her long ago.

Martha sees Ilsa as a caution of what could happen if she tells authorities what her father does. Ruby and Jordan have incredible voices and it’s apparent the stage is where they belong.

Ilsa is also a sign of hope for Moritz before he takes his own life. It is also special that Ruby takes some time when she is ‘off stage’ to stay on stage and play the violin with elegance, as her talent lies within music as well.

The director, Tim Hill understands the musical to his very core and gave each character the proper attention when they staged the show. The moving of the boxes around the space stood out to the audience seamlessly. It is gorgeous how the characters are onlookers to the story, like the audience, when they aren’t present in a certain scene. It’s as if they are watching it unfold before them, waiting to see the outcome too. That is very clever and creative to employ.

The set of the tree in the background and foreground with the electric lightbulbs instead of leaves is simple, yet very effective, as it is foreshadowing the growth that is about to be had by the characters. Claire Mcfadyen and Wes Bluff present the set and lighting wonderfully.

Dominic Woodhead spearheads the musical as the actors are supported immensely by the unforgettable band and direction on his behalf. This show of course would not be possible without Spencer Bignell the genius producer, giving the breathtaking story it’s wings to fly, congratulations.

This spectacle is not one to be missed, Spring Awakening like you have never seen it before. Extended by popular demand, only at the Metro Arts Centre until Saturday 8 September! Snap up your tickets to this tremendous production now by clicking here or head to the Underground Broadway website!