Get ready to fly and discover real Disney magic!

Brisbane was transported to the famous fictitious land of Agrabah, for a truly Arabian opening night at Disney’s Aladdin the musical on 24 February, at the Queensland Performing Arts Centre. The classic 1992 animated film was beautifully adapted to the stage for the Broadway production in 2014 and has finally made its way down under. The Australian production was nothing short of fabulous, with all the bells and whistles the original show possessed.

The cast delivered a stellar performance telling the tale of a poor thief, named Aladdin who wishes for a better life for himself. The young ‘street rat’ and his band of friends Babkak, Kassim and Omar (replacing monkey, Abu from the film) steal loaves of bread in the marketplace. This is where he meets Princess Jasmine, (unbeknownst to him yet). His luck changes, so he thinks, as he meets the Sultan’s Royal Grand Vizier, Jafar and his minion, Iago. They inform Aladdin that he is the chosen ‘Diamond in the Rough’ and his destiny is to collect the magic golden lamp from the ‘Cave of Wonders.’

Aladdin foolishly enters, fetches the lamp and discovers a powerful Genie hidden inside that vivaciously tells him he is granted three wishes by rubbing the lamp. From one wish and song dance number to the next, adventure and trouble ensues. To gain the attention and affection of the impossible Princess Jasmine, Aladdin enlists the assistance of the Genie to turn him into a Prince fit for a Princess.

Australian actor, Ainsley Melham, plays the mischievous and fun – loving Disney title character we all love, Aladdin. His portrayal of the iconic street rat turned ‘Arabian prince’ was phenomenal. Melham begun the show stealing from the market in the adventure song, ‘One Jump Ahead.’ He was quirky during the marketplace number, ‘Babkak, Omar, Aladdin, Kassim’ and demonstrated his vulnerable side in his heartfelt ballad ‘Proud of your boy,’ being the ‘I want’ song of the show. He wanted to make his late mother proud. Both of these numbers were cut from the original animated film and restored for the Broadway stage production, by genius song writing team Alan Menken and the late Howard Ashman, in addition to Chad Beguelin who also wrote the book for the show.

Ainsley’s voice is breathtaking and his connection with Hiba Elchikhe who plays Princess Jasmine was just perfect particularly during ‘A Million Miles Away.’ In this scene they flirt while discussing how they would like to escape and see the world with no restrictions. The young actor highlighted the ‘rags to riches’ fable beautifully, especially when the comical Genie made it possible. The relationship between Genie and the protagonist is touching, complicated and humorous. Ainsley was born to be Aladdin! 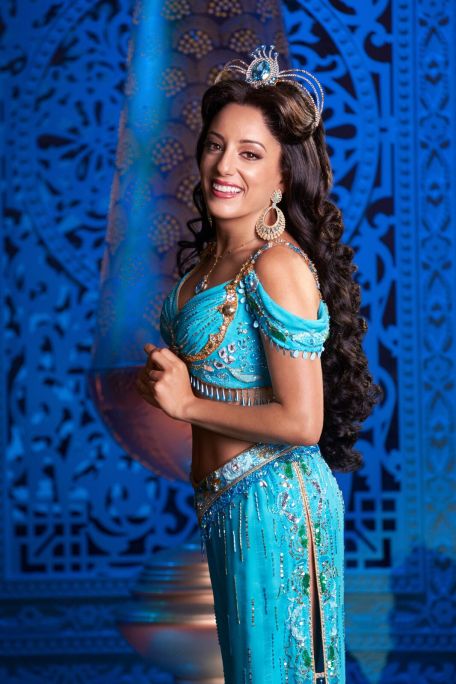 The British musical theatre actress, Hiba Elchikhe personifies the strong – willed Princess Jasmine. She is absolutely stellar in this role and makes it her own. Hiba is so proud and passionate in the scenes where she is talking about her desire to be able to make her own choices and not be forced into a marriage with someone she does not love – as her father (Sultan) is enforcing. Not to mention her curious, bright eyed nature in the song ‘These Palace Walls’, in which she is discussing with her three sassy attendants, what it would be like to see the world beyond the palace. Her talent is incredible and sings with such emotion, particularly in ‘A Million Miles Away’ and the infamous ‘A Whole New World.’

Now let’s talk about that Magic Carpet Ride! Okay, so that was the most breathtaking, flashback to my childhood, majestic stage moment I have ever witnessed. First of all, how is it flying? Second, the chemistry between the Arabian couple while they were angelically belting their faces off, was ‘wow.’ Third, can I have a ride? I couldn’t get enough and my ‘Whole New World’ ended when they landed. Her onstage bond with Ainsley was similar to a real married couple throughout the course of the show. Hiba’s happiness for the part shines through like a ‘Diamond in the Rough’, she definitely deserved to join the Australian cast. She gorgeously portrayed the women – empowerment princess that we all know Jasmine to be.

Did I hear big a Broadway number, hilarious one – liners and three wishes at my disposal? Oh and don’t forget the magic. Yes it’s the legendary Genie played by Australian, Gareth Jacobs. He was out of this lamp ridiculous, witty, side – splittingly funny and had as much sass as RuPaul hosting ‘Drag Race.’ From the moment he binged out of the elevator and announced his presence, to the tap – dancing and fireworks that was ‘Friend Like Me’, he SHOWED UP in Brisbane.

The Australian and Brisbane related references were my favourite. At the top of the show he pulled a jar of Vegemite out of his pocket and said ‘Wrong one, a little pre – show shopping’ and pulled out the golden lamp from the other. He also mentioned the city of ‘Ipswich’ in an off-putting fashion which left the audience in a fit of laughter and requested the beloved Australian snack Tim Tams, several times. 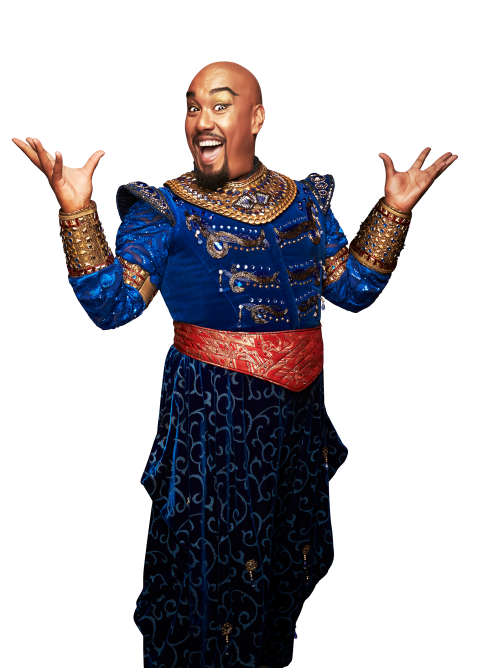 The rapport between Al (what Genie named him) and the powerful being was very best friend like, straight off the bat. As the song suggests they always had each other’s back. Apart from when Aladdin almost used his last wish on himself, although previously promising his blue sequinned friend’s freedom. However by the conclusion of the show their friendship grows and Aladdin learns the importance of keeping his word and grants Genie his freedom. Gareth beautifully highlighted the joy and vulnerability of the wonderful powerful Genie and celebrated his freedom by bringing out his Hawaiian holiday shirt and Goofy hat.

Jafar and Iago, the villains of the story are brought to life by Adam Murphy and Aljin Abella respectively. They portrayed the evil beings perfectly and more comically than the film version and than expected. Iago is now a man in the stage version and not a cartoon parrot. The dynamic duo played off each other fabulously like a villain and sidekick should. One of my favourite moments of theirs was their ‘evil laugh off’, leaving the audience in hysterics.

I especially loved in ‘Diamond in the Rough’ the way Iago pulled out a mini violin from his Arabian pants and played a solo. It was the right amount of humour at that point in the song. They really brought it with the incredible costumes and physical slapstick comedy as well as delving into their sinister selves. Jafar’s maliciousness is especially showcased towards Aladdin in the final climatic scene where he turns into a Sultan then Genie through some Disney magic. 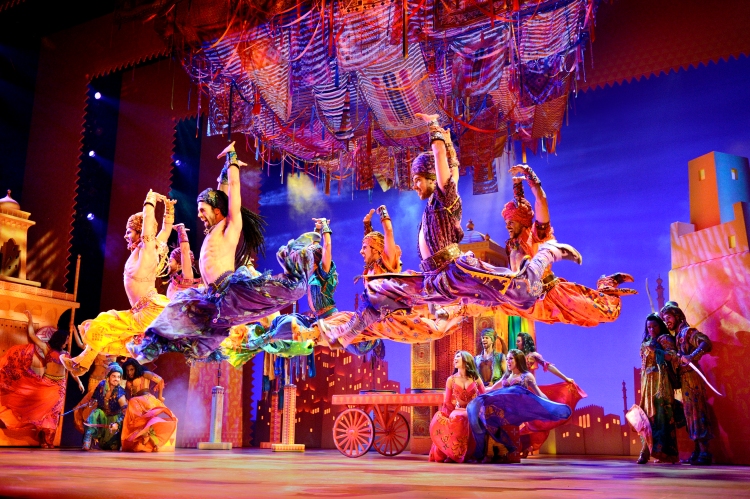 The real joy and majority of my laughter derived from the most kind and helpful thieves you might ever meet, of course Babkak, Omar and Kassim. The new characters and Aladdin’s best mates were not featured in the animated movie. However they replace Abu, his monkey pal from the original. What I adored about these three roles played by Troy Sussman, Robert Tripolino and Adam Jon Fiorentino respectively is that they had Aladdin’s back and were not afraid to show it. In ‘Prince Ali’ where Al came out as a ‘prince’, his three fellow pickpockets joined him in their white sparkling getup and all.

They put their differences aside to help rescue Al from the dungeon of the palace. However, through their incredible fight scene with swords in ‘High Adventure’, end up being locked up first. Troy Sussman as Babkak in particular has been blessed with all the crazy one – liners with reference to Middle Eastern food. Omar exclaims, ‘I feel awful’ and Babkak replies, ‘Falafel? Did somebody say falafel?’ or the line ‘It’s not right to bully’ and answers, ‘Did someone say tabouleh?’ In addition Robert Tripolino as Omar is the sensitive but tough one and asks if they can write a strongly worded letter instead of storming the palace. Nevertheless once he has a sword he says ‘This is awesome’ and is the sweet one of the trio, always has a smile as he dances. Adam Jon Fiorentino represented Kassim in the best way. He was the wise and closest friend to Al but ultimately the one who decided to fight for his friend back and had the funny solo in ‘Prince Ali.’

Princess Jasmine’s father, the Sultan is portrayed by New Zealand actor, George Henare. He demonstrated the tough but lovable persona this character ought to bring to life. His warmth but strict nature led him to be a touching presence on stage. Especially the scenes with Jasmine. He was very firm in saying she had to marry a prince or he would find one for her. The ideals he set out were soon crushed when he realised Aladdin made her very happy even if he wasn’t royalty. 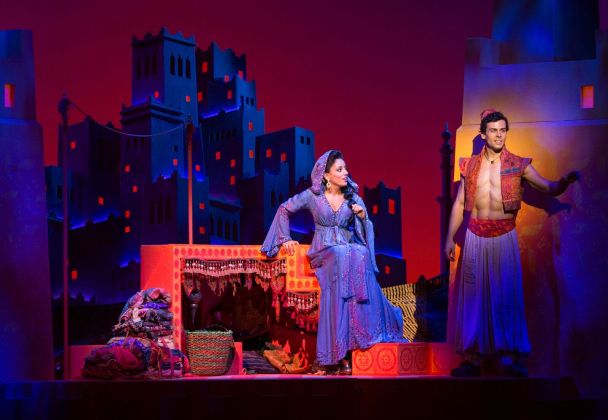 The fantastic ensemble held the piece together and the dancing and little nuances made the show. They brought the magic to life in a very succinct and light-hearted way. A standout was the fun – loving Fortune Teller in the marketplace, played by the talented Sasha – Lee Saunders. All of the colourful and Middle – Eastern inspired dance numbers were choreographed to perfection by director-choreographer, Casey Nicholaw. My personal favourites were ‘Friend Like Me’, ‘Arabian Nights’ and ‘Babkak, Omar, Aladdin, Kassim.’

The undeniably stunning costumes were everything. From the Genie’s blue sequinned sparkly outfit to the gold getup the dancers were flashing, it was all breathtaking thanks to Tony Award winning designer, Gregg Barnes. In particular I adored the colourful combinations for Aladdin’s best friends. This show truly shone through with the onstage magic left, right and centre. Number one on the list, is of course the magic flying carpet as mentioned earlier. How on earth is it flying through the sky holding Aladdin and Jasmine? Additionally the costume changes especially when Aladdin gets behind the curtain and is suddenly ‘rags to riches’, becoming a prince. The fireworks and not to mention the entire ‘Friend Like Me’ sequence with the ladies coming out from behind the gold pillars. It was all so Genie-us!

In summary this is a Disney hit for the entire family to come along and enjoy! You are in for a gorgeous story, wonderful sets and costumes, unstoppable music, laughs and pure magic. Go see Aladdin and may all your wishes be granted.

Book your tickets for this magical show here http://bit.ly/2F959TI