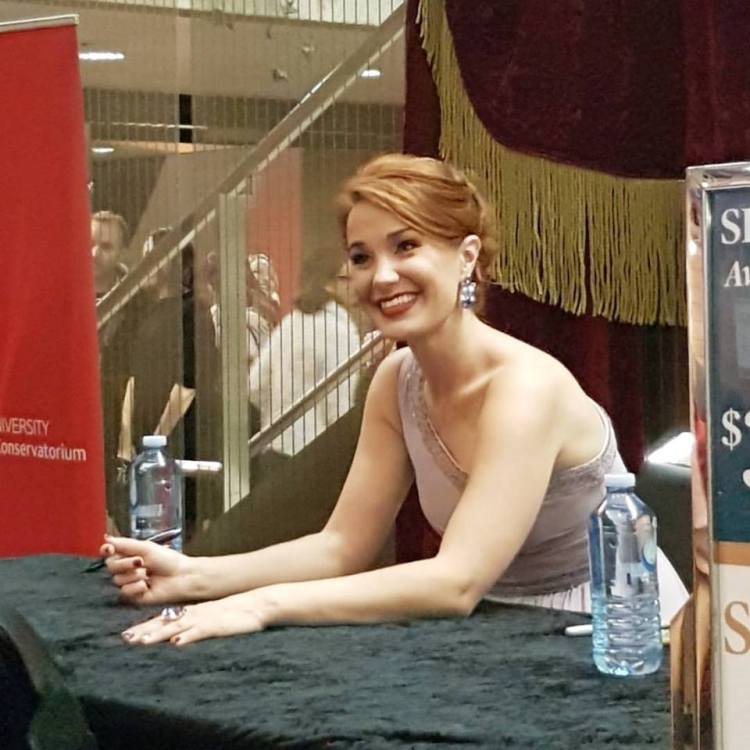 Sierra embodied all that is Broadway and Opera, as she is widely recognised as the infamous Christine Daae in Phantom of the Opera, in which she performed the show in Las Vegas until being asked to take over the role on Broadway for the 25th anniversary. Her breakthrough role and Broadway debut was playing the original Ariel in The Little Mermaid on Broadway and various roles in Les Miserables for instance Cosette and Fantine and reprising her role as Christine Daee however in the sequel, Love Never Dies. Recently she originated the role of Principal Rosalie Mullins in School of Rock the musical on Broadway with music and lyrics by Andrew Lloyd Webber (ALW)! You see there is a theme here with ALW at the helm of majority of her resume.

The musical theatre superstar began her show walking on the stage to a roar of cheer from the packed theatre, with her sister Summer on cello, brother – in – law Brian Hertz as the musical director and her local Brisbane orchestra supporting her she started by singing one of her ‘favourite things’, The Sound of Music! She went on to explain how Dame Julie Andrews was a big influence on her career and followed that by performing I have confidence and a rendition of The lusty month of May, all an ode to Dame Julie.

The very witty and comedic sense of humour that Sierra possesses shone through during the show as she told the audience that ‘if you know me you know what I’m about to do next’, referring to performing Think Of Me the iconic Phantom of the Opera song. She said I will be singing it three ways, in English, in French (which she said she would explain later) and another way that the eager audience would soon find out. She had to learn the whole of Phantom in French for the Paris production that didn’t go ahead due to a fire that burnt down the theatre (coincidence, I think not)

True Sierra fans would know she loves Britney Spears and impersonating her as she has displayed in her Phantom of the Opera Daee Days Broadway.com vlog if you click here, therefore her third version of the song was impersonating the popstar! With the whole hall in fits of laughter it was just a perfect way to showcase right from the beginning that it was going to be a night full of giggles and non – stop genuine fun!

The whole night she would talk to the audience as if she were casually chatting to a friend, so personable and relatable it was very refreshing! She soon proceeded to excitedly mention her Broadway debut was portraying Ariel in The Little Mermaid on Broadway. Being on Broadway, doing what she loved was her biggest dream for so long and to get to do it in a Disney show that she loved so much with Sean Palmer as Prince Eric, Norm Lewis (whom she played opposite later in Phantom) as King Triton and Sherie Rene Scott as Ursula she believed she was so lucky to have had that as her first show in the Broadway community. Sierra then led into a Disney medley of How Come!/Just Around the Riverbend/Can You Imagine/ and the highlight of the night for the Disney fangirl in me when she belted out Part of Your World.

Brain Hertz’ arrangements were particularly stunning for songs like I Don’t Care and Come to my Garden where she revisited her days just recently performing the role of Lily in The Secret Garden, she sang both beautifully with her controlled youthful voice. Speaking of garden’s throughout the evening Boggess delve into the notion that we are all apart of the world and nature helps us in ways we don’t even realise it.

Sierra said she loved that she could go to the Brisbane River just before the show and just see how the water flows and it is something that we all should do. Getting back to nature and learning from the trees and how they are always grounded to the earth through their roots, is one of the ways she prepares for a performance if she is feeling nervous. Sierra is a very spiritual and earth – filled person as she says that we should trust the universe and go with the flow coming back to the river metaphor, knowing that we are all enough! Which circles back to a mantra that Sierra and majority of her fans have adapted and live by; ‘You are enough, you are so enough, it’s unbelievable how enough you are’ and she got the people in her audience to repeat it back.

One of the songs I really appreciated and loved that she performed was ‘Stars’, from the legendary musical ‘Les Miserables’ that she was apart of. Although the male character of Javert sings this number in the production, Sierra made it her own and highlighted the depth of her range. As a soprano she is able to sing very low when performing a song like this and her reasoning behind it was that even though she played Fantine who’s known song is ‘I dreamed a dream’ she wanted her fans to feel uplifted and inspired when seeing her show and that was not the song to illustrate that feeling.

Sierra created an accepting and safe space in the concert hall for all walks of life to enjoy her diverse show, by constantly reminding us how enough we are! This was exemplified when singing the song ‘Everybody’s got a home but me’. She sang this as an ode to all the minorities no matter what your sexuality is, gender, different race and more who get pushed aside especially in the current climate.

It was at the point in the night where she brought out a piece of paper and said that these were real love letters that her grandparents wrote to each other during World War 2. She began reading them aloud and the care and love between them was so human and real it sounded like it was from a romantic novel from Shakespeare’s time. You could hear weeping from the crowd when hearing the instantaneous affection and desire they had for each other. Sierra mentioned she wished she could have a love like her beautiful grandparents in her lifetime and led into ‘Smoke Gets in your Eyes’ and ‘You’ll Never Know.’

One of the final highlights of the fun – loving star’s show was when she began telling the story of when she was invited over to Andrew Lloyd Webber’s mansion to sing for the Queen of England’s birthday! She was like ‘ok yeah sure’ and as she told the once in a lifetime tale, she comedically sang ‘If my friends could see me now,’ from Sweet Charity! Sierra explained it was the most surreal experience that went by so fast and she carried out research of how to act around a Queen, curtsying and saying ‘your majesty’ and it was a major pinch me moment for her.

Broadway’s down – to – earth operatic songtress did not disappoint at her concert in Brisbane that evening! Miss Boggess concluded her show with ‘Wishing You Were Somehow Here Again’ the unmissable Phantom classic and encored with Britney Spears making another appearance. The incredible artist greeted every single fan following the show by signing autographs and meeting her beloved Brisbane fans. Sierra Boggess is a talent that all should see!