Lisa is thrilled to be playing the quirky traveler Andy in the brand-new original Australian musical presented by La Boite Theatre Company in association with Brisbane Powerhouse, Neon Tiger.

Lisa graduated from the Western Australian Academy of Performing Arts (WAAPA) in 2011 (BA Music Theatre). She has appeared in the Australian production of Once by GFO/MTC as Girl Cover. Credits include: The Leftovers (HBO), Sexy Herpes (Maddan Productions), Eliza Doolittle – My Fair Lady (Footlight Productions), Desperate and Dateless – Adelaide and Perth Fringe Festivals (Ginger and Tonic) and Dreamsong (Melbourne International Comedy Festival).

Lisa has written and performed her own show Being Free: The Songs of Joni Mitchell and appeared in John Fleming’s production James Taylor: Bittersweet and Low playing Joni Mitchell, Carole King and Carly Simon. Lisa is a singer-songwriter accompanying herself on guitar and piano. She currently performs solo and as part of duo in a range of settings from weddings to wine bars.

We talked to Lisa about her love of performing, her role in Neon Tiger and the rehearsal process, how she enjoys the Australian theatre scene and more.

How did you begin performing and what is your favourite thing about the art form?
When I was 7 years old I did my first ever show, Annie. I was a scrappy orphan in raggy clothes, belting ‘It’s A Hard Knock Life’ at the top of my lungs… and I was absolutely hooked. The thing that keeps me hooked is the relationship you have with an audience – it’s like nothing else. It’s different every night, in every show.

What is La Boite Theatre Company’s ‘Neon Tiger’ about for those who don’t know?
Neon Tiger is essentially a love story. My character Andy is living in Bangkok, escaping a
broken heart and trying to write her debut album. She meets Arisa, an American-Thai woman visiting Bangkok for the first time. Sparks fly and a whirlwind holiday romance ensues.

Tell us a little about your role Andy and what drew you towards it?
Andy is so in the moment – she’s vulnerable, hilarious, awkward, a bit of a mess – but she has the biggest heart. I think that’s what drew me to her. She’s got her heart on her sleeve and that’s so fun to play. Also, Andy’s a singer/songwriter, as am I; playing a musician always adds an extra layer of enjoyment for me, because I get to toy with a whole different level of expression.

What was it like rehearsing for this new and exciting role?
It was hectic in the best kind of way. There was always so much to think about as I’m playing a lot of music at the same time. Every day was different, fun and challenging, and I fell into bed every night utterly exhausted and thrilled.

How would you describe the music in the show?
Joyous and beautiful. Gillian Cosgriff’s music is wonderfully witty and fun, and so full of heart. It’s an absolute pleasure to play her songs every night. I’ve known Gill for a long time and always loved her work, so being able to be a part of something she created is extra special for me.

What did the creative’s Gillian, Kat and Julia-Rose reveal to you about the story behind the show?
To travel to Thailand as a trio is such a creative way to write a show. I love that so many parts of the show are based on real anecdotes and things that happened to them in Thailand.

What do you love about performing in the Australian theatre scene and particularly Brisbane?
This is actually the first time I’ve performed in Brisbane, so I feel like I’m discovering a whole new world! I’m a Melbourne girl, so first and foremost: THE WEATHER! How can you not fall in love with this sunshine? But also: this city has so much culture and openness, I love how much live music I’m finding around the city in bars and pubs.

Also theatre is thriving, with amazing companies like La Boite, Brisbane Powerhouse investing in the development of new works such as Neon Tiger is just awesome. But the best thing about performing in the Australian theatre scene is the people – every show you work on, you come across cast and crew who you’ve worked with before, or friends you have in common, or shows you’ve both seen and it’s a matter of minutes until you feel like old friends. 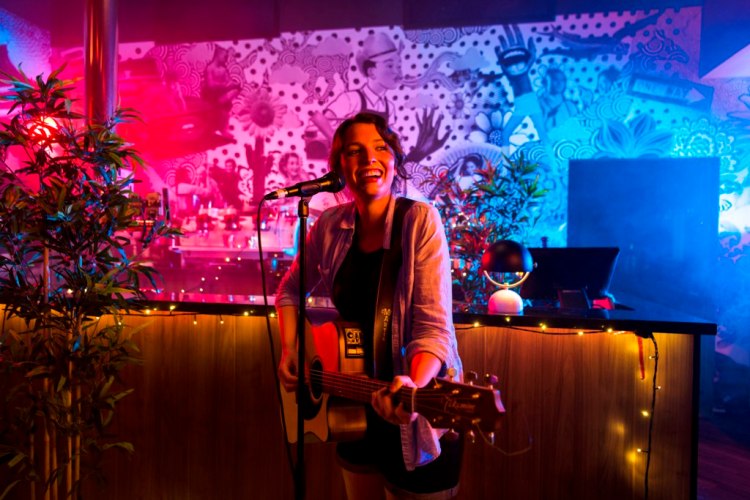 What do you hope audiences take away from this production?
That relatable feeling of falling for someone, head over heels. It’s an experience that is universal for an audience, because it’s so… human. Also, perhaps some nostalgia for the joy and excitement of travel. This show brings out the exhilaration of a place like Bangkok, and I hope that the audience can really feel that vibrance.

Favourite Play or Musical?
ONCE

Any pre – show rituals?
SO many, but always solid vocal & physical warm up and Courtney hug (co-star)

Place you most want to travel to?
NEW YORK CITY

Favourite thing to do with loved ones?
Eat beautiful food, dance and be silly

Finally, do you have any secret talents?
I’m a bit of a dog whisperer. No, really. Dogs and I understand each other. Do you think I’m crazy now? Don’t worry, your dog gets me.

Thank-you for joining us at The Fame Reporter. We wish you all the best and chookas for the show.

Get your tickets here