Hiba is thrilled to be playing the strong – willed and hopeful Princess Jasmine in the Australian tour of the iconic Disney tale, Aladdin the musical.

The English actress studied at both the Brit School of Performing Arts and Technology and Mountview Academy of Theatre Arts in London. During training she starred as Mimi in Rent, Mallory/Avril in City of Angels and Mrs Walker in The Who’s Tommy. After graduating, Hiba performed the role of Mrs Santiago and understudied Molly in Ghost the musical (Asia) and was involved in the Bend it Like Beckham musical Workshop. The talented triple threat was also cast in The Sound of Music: Live on UK television and has been a featured soloist on both Friday Night is Music Night and Elaine Paige on Sunday for BBC Radio 2.

We talked to Hiba about her career thus far in the theatre industry including her reaction when being cast in the Disney Broadway hit musical, her dream roles, what her character has taught her and more. See our interview below!

What was it that sparked your interest in acting/performing initially?
I have truly loved performing since I was a child. In my nursery reports it would read ‘Hiba loves dressing up as princesses and putting shows on for everybody’ and that’s the truth. I think I thought about it properly at the age of 16.

How was your experience attending The Brit School of Performing Arts and Technology and Mountview Academy of Theatre Arts? How did those experiences affect your current career progression?
The Brit school is truly the best school in the world (I honestly believe that) as far as I know it’s the only free specialist performing arts school in the world and its run by incredible staff! It definitely sparked my love for musicals and made me want to apply for Mountview. Mountview was incredible, it taught me how to integrate my skills into the profession. The skill set I learnt at Mountview was invaluable and enabled me to sign with my current agent when I left drama school and I also got my first job whilst at Mountview.

What 5 performers dead or alive would you love to have a dinner party with and why?
Barbra Streisand, Whitney Houston, Michael Jackson, Oprah Winfrey and Meryl Streep.

All of these performers influenced my life. They are all incredible and I would have a million questions for all of them!

As an English native what are some of your favourite things about Australia?
The people, the weather and the food!

How did you react when you were cast in the leading role of Princess Jasmine in Disney’s Aladdin and what did you like about the role?
I broke down crying. It was honestly a dream come true! She is a fierce fiery independent Princess who is not afraid to go out and get what she wants! It was truly a blessing of a role.

What was understudying Molly in Ghost like and what are your thoughts on the discipline of understudying and how has it helped you get to where you are today?
I think being an understudy is invaluable! You learn so much. My leading lady was Lucie Jones in Ghost and she is incredible one of the most talented and genuine ladies I have had the pleasure of working with and I learnt a lot from her, she is one of my best friends now. I think having someone like Lucie as a role model truly gave me insight in what kind of leading lady I wanted to be and I have a lot of respect for all the understudies and swings in the show having to learn multiple plots! Shout out to Kim Hodgson and Heather Manley that both cover Princess Jasmine.

What are the most challenging and rewarding parts about playing Princess Jasmine?
The most challenging part of any show is having to do 8 shows a week and staying healthy. The most rewarding part of playing Princess Jasmine is being a role model for so many people and getting to bring to life such an iconic female character every night. When I was growing up there wasn’t an actor/actress who looked like me on stage. Another rewarding part of playing the role is having people at stage door come up to me and say it was amazing having representation of them on stage and that they now feel like that are capable of doing it.

Do you have a role in any musical theatre or straight theatre piece that you are dying to play?
My ultimate dream role is Elphaba in Wicked (that’s been my dream since the age of 11) in recent years I’ve always wanted to play Eponine (Les Miserables) or Eliza (Hamilton) and straight play wise I would love to play Delphi (Harry Potter and the Cursed Child).

What has playing Princess Jasmine taught you and has it changed how you look at women’s rights in the world we live in today?
It’s so important playing Princess Jasmine especially in the current climate! Every time I say “ what’s wrong with a woman running the kingdom” I think of how many little girls are sat in the audience thinking that could be them. On a personal note, Princess Jasmine has taught me not to be afraid of change and never to be scared to go out and fight for what you truly believe. 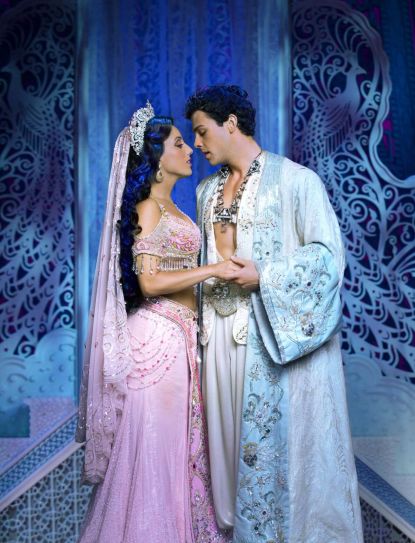 What is a future dream of yours and can you reveal any upcoming projects?
I would love to venture more into TV and film. I recently recorded a concept album for a new musical called ‘Broken Wings’, which is being released in May.

Lastly who or what inspires you?
My Mum inspires me! She is the epitome of a strong woman who was not afraid to go out there and get what she wants.

Place you most want to travel to?
India

Finally do you have any secret talents?
I speak 4 languages

Thank-you for joining us at The Fame Reporter. We wish you all the best and chookas for the Australian tour of Aladdin.

Don’t miss seeing Hiba fly the magic carpet in Agrabah, before her last show on 17 May at the Lyric Theatre, QPAC in Brisbane.

Aladdin is currently playing at the Lyric Theatre, QPAC until 3 June, 2018 then flies to Perth on 19 July get your tickets here – http://aladdinthemusical.com.au/

See our fabulous review of Aladdin the musical in Brisbane click here!