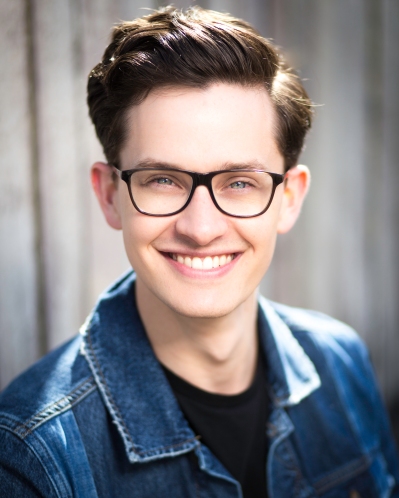 The Fame Reporter interviewed Joshua Broadbent, Assistant Stage Manager of the current Australian touring company of the much loved classic – The Wizard of Oz.

Joshua Broadbent grew up in Lake Macquarie (New South Wales, Australia). His passion for theatre grew after joining Young People’s Theatre (YPT) in 2002 and after many years of attending drama classes he made his stage debut performance in the 2007 production of Charlottes Web. While he enjoyed performing, the technical elements of live theatre is where he found his passion. His love for live theatre and his commitment to YPT saw his passion grow, working on back to back productions, frequently multi-tasking roles. Five years of devotion saw him appointed the Technical Officer by the Management Committee, which required him to oversee all technical elements of the theatre.

In 2012 he applied for one of Australia’s leading Performing Arts Schools, The National Institute of Dramatic Art (NIDA) and was accepted to study a Bachelor of Dramatic Art (Production) graduating in 2015. In his final year at NIDA he got the opportunity to work with some of the leading entertainment practitioners and since graduating he continues to explore his passion through events, plays and musicals. 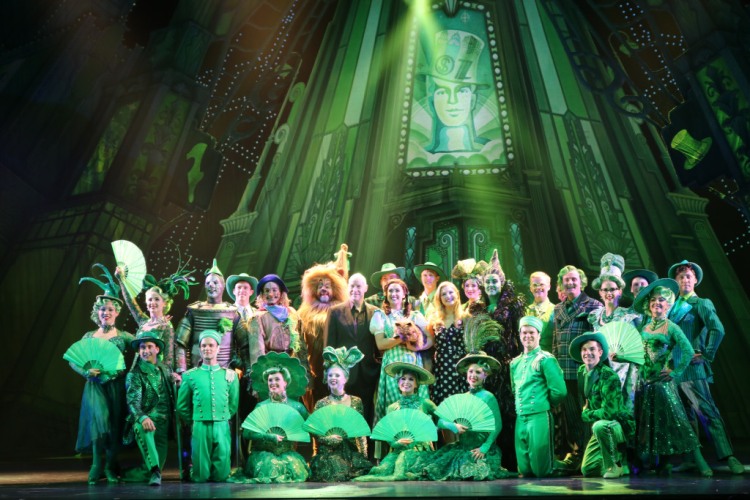 We talked to Joshua about his daily life as an Assistant Stage Manager, his reaction when he booked the job touring with The Wizard of Oz company, the rewards and challenges about stage management, a Fame Reporter exclusive reveal of his new project and more.

See our fun and in-depth look behind the curtain below!

Welcome to The Fame Reporter Joshua, What was it that sparked your interest in Stage Management initially?
Hi, thankyou for having me!

Theatre has always had a huge impact on my life. It all began back in 2002 when I started attending drama classes every Saturday at Young People’s Theatre Newcastle. Originally I set out to perform, like everyone I wanted to be an actor… I’d like to think I gave it my best go, but soon I realised there was a huge world outside of performing that was calling my name.

Young People’s Theatre produces four shows a year, and since my first show in 2007 as Lurvy the Farm Hand in Charlotte’s Web I went on to find myself lurking in the shadows backstage. I’ve been everything from a flyman, a director, a lighting operator and even a designer. I have over thirty-one credits with YPT and the list every now and then continues to grow.

Surprisingly enough, I only ever Stage Managed one show at YPT, but have been called in tobe a calling swing for a few shows. I knew at that moment I loved it and it could actually turn out to be something I could see myself doing forever.

A few years later, a couple more shows I decided to try my luck and further my knowledge by applying for NIDA (National Institute of Dramatic Art) and I got in!

How was your experience attending NIDA (National Institute of Dramatic Art)? How did that experience affect your current career progression?
NIDA teaches you a lot, it pushes you to your limits, but it’s all for a good cause. This industry is tough, will require long hours, a lot of brain power and to deal with multiple personalities. Also that it is okay not to get along with everyone. That is one of the most valuable lessons I have taken away from studying there, you can not please everyone, but you do need to be able to work together to ensure the productions are a success.

The Technical Theatre and Stage Management course is a three year Bachelors degree, where you spend two years in the classroom learning the essentials that you need, and then putting them to the test during production seasons, but your final year you get to spend out in the industry on secondments, working with industry professionals. I was really lucky that I got to work on some spectacular events and productions during my final year. From Sydney New Year’s Eve Fireworks to Aida for Opera on the Harbour and then Matilda The Musical.

The third year is all about networking, finding those connections that are going to help you get kick started in the industry, you need to make a good impression, not be too cocky and definitely not be lazy. You’ve got to show you can work, and that you have the skills that it takes to do this professionally.

What 5 performers/stage managers dead or alive would you love to have a dinner party with and why?
This is such a hard question, I have only met maybe about 10% of the industry here in Australia and even less in the UK and US. There are so many professional Stage Managers out there I would love to have the opportunity to work with, meet, hear their stories like the horrors or the laughs and gain more knowledge.

Take us through a day in the life of an Assistant Stage Manager (ASM) and what’s the best thing about your job?
Every single day for me can be very different, but from arriving to leaving I have a set of ASM specific tasks, such as monitoring the tea and coffee supplies, managing the petty cash and going out and buying items for the show.

Currently, on The Wizard of Oz because we are nearing the end of our tour and we need to complete a production folder to hand over to the next team (wherever in the world that may be) so we have a whiteboard in the office with a list of tasks that need to be completed.

There is 4 of us on the team, our Stage Manager (SM), Deputy Stage Manager (DSM), myself and a Swing Assistant Stage Manager, so quite often we share the work load. At the end of the day, if a document needs to be completed, one of us will get it done.

Throughout the week we rotate our roles. Our SM is the first person to learn to call the show, will call throughout the technical period and until the DSM is trained up and ready. As the ASM you are one of the last people to learn the call and for me it started when we were in Adelaide. Which has been one of my favourite experiences so far!

So during the week we get about 3 calls each. When we rotate through the calling, we also rotate through the plots. My home plot is Opposite Prompt and our Deputy’s is Prompt Side. This is basically a deck plot, that involves paging, assisting, spotting the movements of automation or flys, the cast onstage and even handling Toto.

I love calling, it’s like being in a control centre, nothing happens unless you say GO.

What was your first professional job as an ASM like and what is something people might not know about your line of work?
My first professional paid job as an ASM is The Wizard of Oz. I’ve done plenty of shows and events since graduating in 2015, but mostly as the Stage Manager for companies like the Australian Theatre for Young People. Which is a completely different role. A lot of things are Musical Theatre specific, quite often during plays you are a team of one, and you don’t get to call the show, but rather operate lighting and sound.

A lot of people say “I could be a Stage Manager, I can totally boss people around”, but our job isn’t about bossing people around, it’s about connecting people and departments. We have to maintain a healthy relationship with everyone, be a leader and be a friend at the same time, because after all theatre is collaborative experience.

How did you react when you booked the job on The Wizard of Oz touring company as the Assistant Stage Manager and what do you like about this job in particular?
You have no idea! I was working at SeaLife Sydney Aquarium (a great casual job in -between productions), and nobody there knew because when you send your CV out to every Producer in Australia you never know what will happen.

So here I am on my lunch break, reading my emails and bam! “’I’m delighted to offer you the position of ASM for Wizard of Oz.” My whole body filled with excitement. I immediately rang my fiancé and told him, then rang my family. It was a crazy experience, but being my first professional ASM touring contract I was beyond excited!

You need to be really quick on your feet, but also be able to think logically because you never know when something can happen. Whether that is a show stop, or an important prop has all of a sudden broken, perhaps working with children and their somewhat unexpected nature… which you could say the same to my current job and working with dogs.

Being able to keep your cool and stay focused is most important and I can tell you when it all comes together in the end it is a huge reward!  But really, I love it, and that’s why I do it!

Do you have any musical, play or other form of entertainment you would love to be a stage manager for?
There are so many shows out, old and new, that I’d love to have the change to Stage Manage. My top three musicals are Wicked, Mary Poppins and Billy Elliot. But also new shows like Mean Girls, Anastasia, Dear Evan Hansen.. seriously we could be here all day listing musicals.. but basically I want to work on the shows with songs that never leave you head.

What is a future dream of yours and can you reveal any upcoming projects?
I just want to keep working in theatre, keep pushing myself and slowly climbing the ranks, bring my flare and knowledge with me.

As for upcoming projects, a Fame Reporter exclusive right here, I am heading to Evita as the Props/Assistant Stage Manager for the upcoming Australian tour and I am so thrilled!

Lastly who or what inspires you?
My family. They are my biggest supporters. They have always allowed me to follow my dreams, be myself and let me make my own decisions. Without them I would not be where I am today.

Favourite holiday trip you’ve ever had?
Hawaii in February this year. I got engaged!

Favourite Wizard of Oz song?
Red Shoes Blues – I would Drag the crap out of that!

Any Pre – show rituals?
I try and keep my pre-shows very different, simple things like going to the bathroom, or getting changed at different times. It sets me up for the show, because no show is the same.

Finally do you have any secret talents?
I don’t drink coffee. Not so much a secret talent, but it always surprises people especially in theatre. I just have natural energy.

Thank you Joshua for being our guest at The Fame Reporter we wish you all the best and chookas for the Australian tour of The Wizard of Oz. 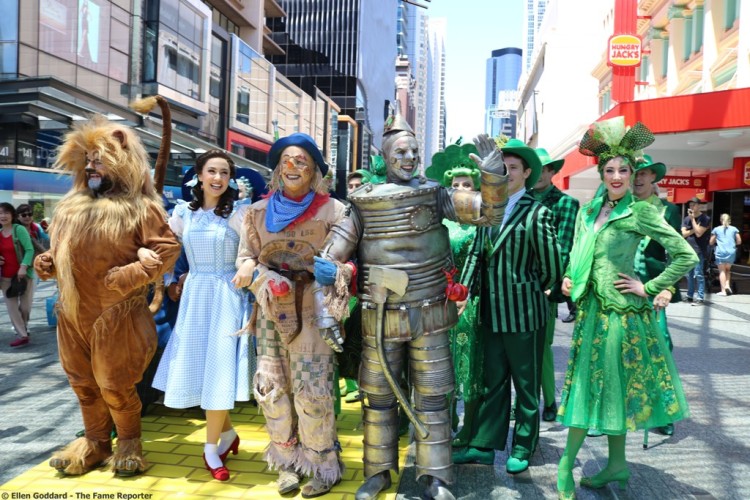 Get tickets to The Wizard of Oz. The show plays in Melbourne until the end of July 2018.

Interviewed and edited by Founder of The Fame Reporter, Ellen Goddard.