Jacqui is so excited to be playing the young, naive and complicated Wendla in Underground Broadway’s production of Spring Awakening playing at Metro Arts, Brisbane from 23 August.

The Brisbane local first graduated from the Australian Dance Performance Institute (ADPI) with a Diploma of Music Theatre and Commercial Dance. Prior to this, Jacqui was accepted into the Bachelor of Music Theatre Course at The Queensland Conservatorium where she graduated in 2015.

We talked to Jacqui about her career thus far in the theatre industry including her reaction when being cast in the coming of age musical, Spring Awakening, her dream roles, what inspires her, what she loves about Brisbane theatre and more. See our interview below!

Welcome to The Fame Reporter Jacqui, what was it that sparked your interest in acting/musical theatre initially?
When I was younger all of my teachers thought I was a bit theatrical. Therefore Mum put me in speech and drama. I thought I’d be an actor but then I changed my mind and went to sport. I wanted to be a swimmer. I trained morning and night wanting to be in the Olympics. Until I burnt out from swimming, as I was doing it too much.

Then I auditioned for the school musical and I was given the role of Nancy in Oliver. I realised I could sing and they said, ‘Jacqui you need to do this.’

How was your experience attending The Queensland Conservatorium and ADPI? How did those experiences affect your current career progression?
I was not a dancer. I was a late bloomer to musical theatre. So I auditioned for all of the schools and they said ‘you can’t dance.’ So I found ADPI full time dance and I was terrified surrounded by amazing people, who had been dancing since they were born and there’s me floundering on the floor. I was like what’s a pirouette?

I was understudying Alice as well but never got to go on as her. Although every time Alice went on stage, the Rabbit puppet got bigger and bigger until it was this electronic puppet, the size of my body. It was a very different experience but I learnt a lot.

What 6 performers dead or alive would you love to have a dinner party with and why?
Phillipa Soo, because when I heard her voice I almost passed out. Cate Blanchett, because I just like to listen to her voice – her speaking voice is stunning. Meryl Streep, I feel like that’s obvious.

Helena Bonham Carter, she’s amazing and everyone thinks I’m like her. Samantha Barks, I just love how her career has progressed. Last one is Missy Higgins, she’s such an Australian icon.

What enticed you to audition for Rent & what did you learn whilst portraying Mimi?
Wow, Rent was so different. I just wanted to perform again. I think when you leave University sometimes it can be really hard, the transition from Uni to try and find work and auditions. I’m super excited that Brisbane has started to do Pro-Am theatre and I was thrilled to audition.

However I did not go in thinking I would get Mimi. I don’t think anyone thought I would get that role. When I got it, I instantly thought oh my goodness how am I going to do this? I had to just let go of everything and completely surrender myself to Mimi. She’s such an interesting character and it was a real challenge but I loved it. It was probably one of my favourite roles I’ve ever played.

How did you react when you were cast in one of the leading roles of Wendla in Underground Broadway’s Spring Awakening and what do you like about the role?
I was so excited I just screamed and jumped up and down when I got the call. I didn’t know Spring Awakening too well until I researched it, but Wendla is so innocent, complex, naive and you just want to help her. I can’t wait to get in her mind and understand her in more depth. I was also excited I get to play 10 years younger than my actual age. 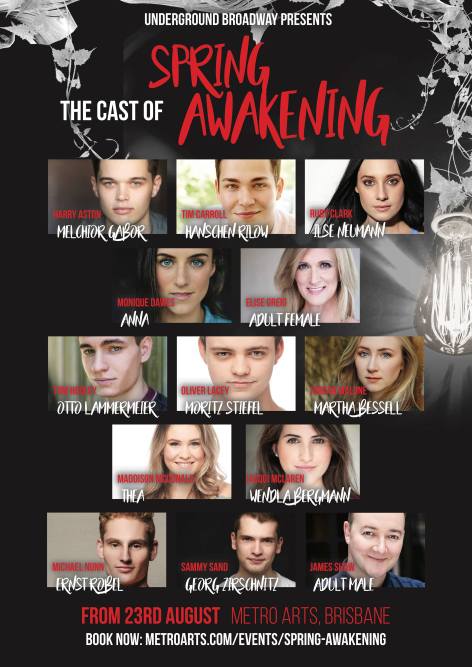 What will be the most challenging part about playing Wendla and what will the show teach audiences?
I think it is going to be challenging to find that complete naive nature. Obviously we are all older and that’s just part of acting, you have to just find it. It’s a really deep story and her journey as the character will be challenging in itself and will really pull on the audience’s heart strings.

What do you love about theatre in Brisbane?
I just love how it has blossomed in the last few years. I don’t really remember growing up and there being much of an indie theatre side to Brisbane. It has grown so much and it’s exciting to see Brisbane putting some really cool shows out there.

Is there any role you are dying to play in the future?
I’m going to be classic and say Éponine. She’s a dream. I got to be her when we sang ‘One Day More’ at University, it was the best thing ever.

Why do you believe the world needs theatre?
I think when an audience goes to see theatre, it opens their eyes to situations they don’t usually think about. In terms of Spring Awakening it’s going to really ‘awaken’ (no pun intended) everyone’s eyes into what goes on in young people’s lives, especially at school. They are transitioning into adulthood.

It is the things we go about in our ‘muggle’ everyday lives and we forget about issues. I believe that theatre; as well as entertain everyone, it can really bring up some important topics.

Who or what inspires you?
My beautiful family, parents, my amazing teachers and a lot of my friends inspire me who have graduated Uni and are in shows, on TV ads and are doing incredible things.

Also my gorgeous partner, I have never understood his life. He is in the Army. Hearing him tell me a completely different aspect of life and what he does everyday. I think that is pretty inspirational.

Spirit Animal?
Cockatoo from YouTube
(That one is for my Uni pals)

Favourite number to perform and favourite you don’t sing?
Shoes upon the table – Blood Brothers and Raise a little hell – Bonnie and Clyde

Favourite song of all time?
Happy as the sun – Tyrone Wells

Place you most want to travel to?
I’ve been before but Japan

Thank-you Jacqui for being our guest at The Fame Reporter we wish you all the best and chookas for Spring Awakening.

Snap up your tickets here!